Growing up I don’t have a memory of being that picky of an eater. There were things, of course, that I didn’t like all that much but the list wasn’t long. Parental Unit Mimi is a good cook. I liked what was served to me. I ate what was served to me. It never would have occurred to me to ask for something other than what was being served for dinner.

I am pausing to think about what the reaction would have been if I had said I didn’t like what she had made and please make me something else.

I think she would have just looked at me and laughed, the thought would have been so ludicrous. When the progeny asked that of me my standard answer was, “Do you see Short Order Cook written across my forehead? No? Then sit down and eat what I cooked for you.”

But there were times when Pilot Man and I were growing up…..

Times when something appeared on the plate that wasn’t to my liking. Chun King Egg Foo Yuck Young comes to mind. To this day, despite Egg Foo Yuck Young being one of HHBL’s favorite Chinese dishes, I cannot eat it. I cannot even let it pass my lips. I shiver in disgust and bury my face in my General Tso’s chicken.

Liver is a tool of Satan meant entirely to cause pain and gagging at the dinner table. There isn’t anything that you can do with it (other than make it into Liverwurst, which is delicious especially on toasted bread with sweet pickles and mayo) that can make it palatable. Please do not tell me otherwise, I like to cling to my gagging unbelief.

I tried everything to get out of eating it. Moving it around on the plate to disperse the foul stuff just caused Mimi to come over, scrape it all together in a pile and pronounce that I hadn’t eaten enough of it yet. Hiding the liver under whatever was inhabiting the plate with it only served the same purpose. I KNEW that starving children in Africa would NOT be grateful for this particular nauseous meal.

And so, the meal would drag on. And liver, left to congeal on the plate, does not get any better with age. It starts to gray out and get a bit crinkled on the edges, looking like it has just come back from a short stint in the desert. As you slowly put a piece of cold liver in your mouth and attempt to chew it enough to swallow it gradually increases in mass and dryness until choking it down may very well cause you to pass out and DIE!

Did I tell you that I don’t like liver.

On those nights when it because a test of wills, mine against my mother’s, and the fate of liver for dinner hung in the balance…… 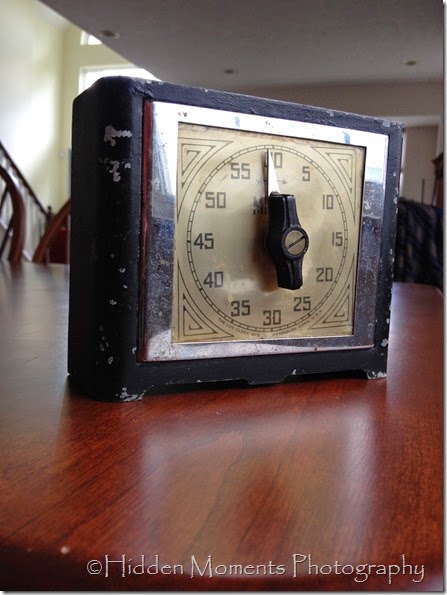 Mimi (heaving a gigantic parental sigh): Then we will need….to set the timer……..

And she would, with great flourish, get the timer from the stove, turn the dial to her designated time and then set the timer down on the counter….with the face turned away from me so that I could not actually SEE how much time she had given me. The uncertainty of the allotted liver eating time was worrisome. It could be 5 minutes. It could be 55 minutes. I just didn’t know. Oh the uncertainty! And as the time passed and the timer ticked down relentlessly to my unnamed doom, she never did actually specify what horrible thing would happen if the timer went off, I caved and gagged down the last of the liver.

As she knew I would.

She is an evil genius, is my mother.

The last time that I was out visiting her, my mom, with great ceremony, gave me the timer for my very own. I mentioned that I had always caved and eaten whatever before the timer went off. And she said,

“Oh yes. That is because, when you weren’t looking, I kept adding time to the timer. I had no idea what I was going to do if the timer had actually gone off and you hadn’t finished your dinner.”