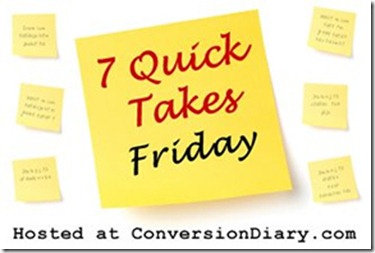 Another week gone. Up and vanished like a fart in the wind. Sorry, for some reason I felt the need to quote a movie line from The Shawshank Redemption. Back on track now.

Remember what you must do. After you have parsed and filed the blather here you need to click on the picture above to be whisked, at the speed of Joe Biden’s smarmy and condescending smile, over to Conversion Diary to see what everyone else has been up to.

1.
Max the Magnificent report because I know you are wondering.

The fleas seem to have been conquered. I have been doing daily “Dangly bits” checks and haven’t seen any indication of the Fleapocalypse. And it is an indication of how uncomfortable Max has been that the day after his little trip to Dr. Jeremy he slept for most of the day, as if he just hadn’t been feeling well.

And when he went to bed on Tuesday night he looked at his crate, noticed that he had a new and non-flea infested piece of carpet in his house and went right in to go to bed.

I am such a bad doggy momma.

2.
A lesson for all of you. Make sure, if you have a photo re-shoot scheduled because the client wants something a bit different, and you have to reschedule said re-shoot because of unforseen circumstances, and you send an email to the client to say that you will come the next day, and you get no response to two emails and a phone message…..they might not have gotten your communication.

And when you then show up at the house and the home owner says, “I expected you yesterday”.

It was that kind of day.

And yet she very graciously let me in to do some photos….but I still have to re-shoot the re-shoot on Monday as the client (who is not the homeowner by the way) wants a shot from a slightly different angle. And I want to give her what she wants.

3.
I have been looking at and thinking about personal photo projects lately.

There have been little ones here and there over the past few years but nothing that was labeled a “personal photo project”. But I am more aware now, as I work as a photographer, that I need something like a personal project to keep the creative juices flowing as it were. Something that has nothing to do with the photo work that I am paid to do. I love my paying work, don’t get me wrong. And I am doing a baby shoot next week. My first. And I am nervous and all get out.

But those aren’t personal projects. They are work projects. I am shooting not my ideas but what the client wants (hence the re-shoot or a re-shoot that I am doing on Monday).

I might have found one. Maybe. I am thinking about it. And I will tell you about it later I am sure.

4.
I mentioned that we were in NYC last weekend to see Cartoon Girl. And while there we were able to spend Saturday afternoon/evening with HHBL’s sister and her family. I can always count on The Viking (sis-in-law’s hubby) to make something unusual for us to eat. 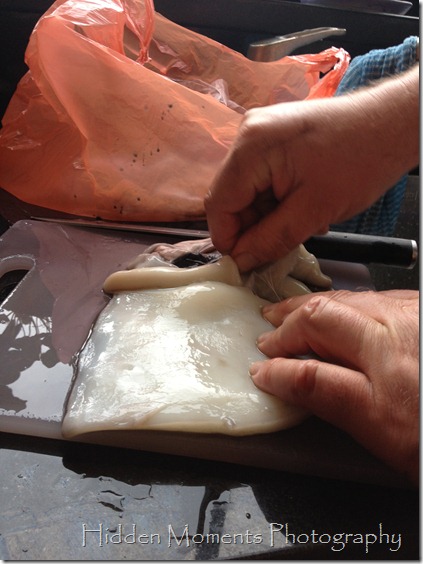 It was actually quite good. I don’t think I even knew that you could eat cuttlefish. But now I do.

5.
LaurenLeap and I have not been out to work in the garden for a bunch of days. And we had a good frost this week so I am sure just about everything is now ready to be pulled up. The lettuce will definitely be gone. We do need to get out there to finish the garden clean up but it just hasn’t happened yet. This time of year my gardening mojo packs up and moves to Florida for the winter, not to be seen or heard from again until about March.

But there are beets to harvest still. And Brussels sprouts.

6.
Twitter, oh Twitter. I really do love Twitter. I watched part of the debate last night. Yes I know that violates the NPAEPM rule but I just couldn’t help myself. But after a while Joe Biden’s utter rudeness, condescending attitude and creepy smile, along with his glaringly white teeth, gave me a headache so I went to bed and monitored via Twitter. That was a much better plan.

And then there was the Twitter follower who showed up this morning. This is his little intro to himself that shows up under his Twitter name.

After checking his Twitter feed, which I do for everyone who follows me (I don’t just blindly hit follow for everyone), it looks like that is all he tweets about, who follows him back.

He won’t be hanging around my Twitter feed for long I am guessing as there is no way I am following him back. Sorry dude.

OK, I am not REALLY sorry. I don’t have that much desire to gather vast numbers of Tweeple. I follow who I want to follow and hope they follow me back sometimes.

7.
Windstream has finally deigned to show up this morning to see if they can get our internet going so that we can give Time Warner the boot.

My personal feeling is that after the Windstream fellow showed up on Monday rather than Thursday when they were scheduled they didn’t show up at the scheduled time just to be a pain in the patookis. HHBL checked and we were clearly on the schedule for last Thursday.

But soon we will be up and running and TW will be a thing of the past for us.

And so I had better get this thing posted before the internet goes out temporarily.