An Overload of Wildlife

Every once in a while around here at Chez Knit I have a day that just seems to be full of wildlife.

We do live in the woods you know. And woods just seem to be full of God’s creatures.

I started off the day by running over a squirrel. And I don’t mean that I just grazed him. If only. I could see him at the side of the road. He could see me. There was that split second of slow motion as you can see that he is thinking it over.

But he did. And then he stopped, right in the road, thinking about which way to go.

He thought too long.

Not a great way to start the day. But I soldiered on and went to a short photo shoot. Then back home to edit photos.

And as I am sitting at my desk noodling away at pictures.

BAM! A hawk soars in and goes for one of the birds at the feeder. Unsuccessfully I might add. But then I was treated to that hawk AND another hawk swooping around in the front yard and going from tree to tree calling to each other. Not another bird sound anywhere in the neighborhood and not a bird in site. 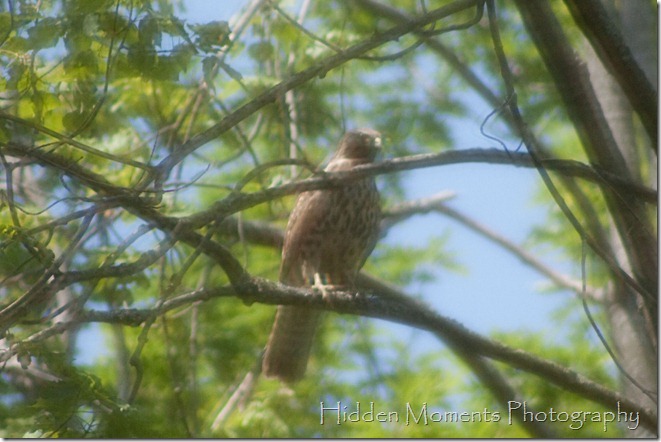 Sorry for the poor quality of the picture. A combination of light limiting screen and my long lens all the way out doesn’t make for crisp pictures.

There was so much squawking going on between the hawks that they woke up all the owls in the woods.

Every one of them. Right about noon. So I was then treated to 30 minutes or so of owls calling back and forth to each other. Some of them are pretty close but I just haven’t been able to zero in on them yet so no pictures. That would be an ultimate for me. 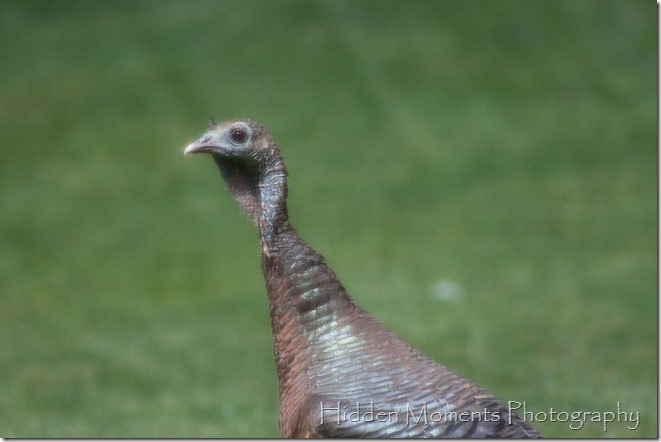 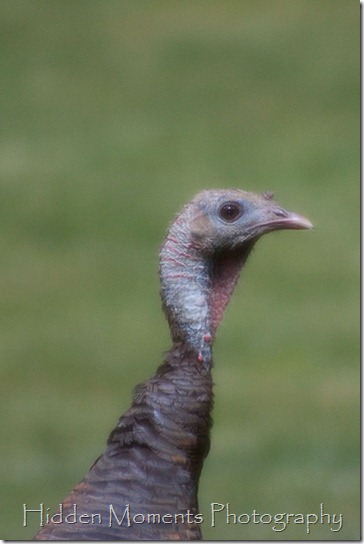 And then these ladies showed up for their usual noon time pecking under my feeder. I am totally captivated by their ugliness and their ability to flow across the yard in a silent river of turkiness. They make no noise whatsoever until they rustle the leaves as they enter the woods. 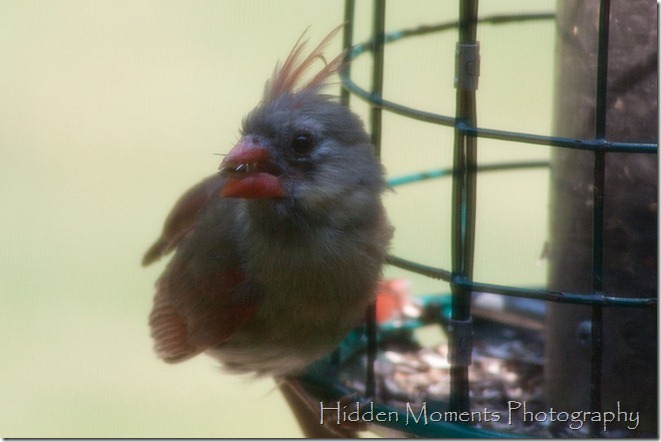 The other birdies came back slowly after the hawks left the neighborhood. The crazy looking Cardinals cheeping and talking to each other.

And I figured at that point that we were done with the Wildlife Follies for the day. Max the Magnificent and I decided that it was time to walk down to get the mail and enjoy the cooler temps. He knew the turkeys had been there and he spent the time it took me to walk to the end of the driveway racing back and forth and following their trail.

I was strolling back up the drive, checking out my Netflix video (The Tudors) and thinking about the fact that the one thing we haven’t seen yet this spring are the fawns that I KNOW are being birthed in the woods.

Hmmmmm, I wonder when they will show up. I wouldn’t thing for a bit yet. Please don’t let there be multiples. Momma will keep them far in the……….

And then as I was strolling to the house, opening the Netflix envelope, I happened to look up and to my left into the little strip of woods between Chez Knit and the house next door. 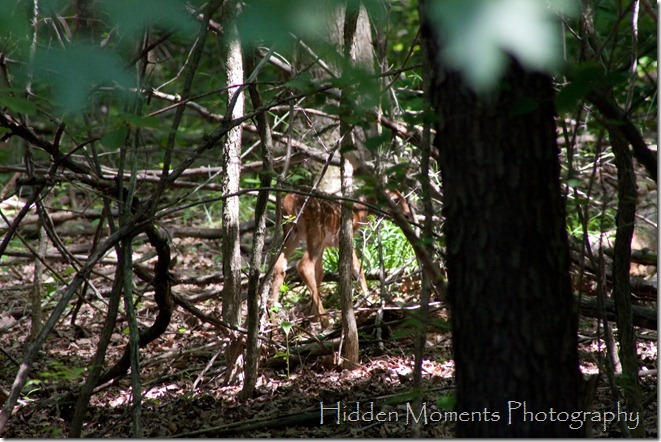 Take a good look. What do you see. Yup, a fawn.

And there I am on the driveway with Max the Deer Non-catcher barreling towards me.

In the house Max. Quietly!

I flow quietly into the house, grab the camera, which thankfully already has the telephoto lens on it, check my settings, prevent Max from going back out with me (he saw the camera and knows what that means) and quietly go back out onto the driveway. 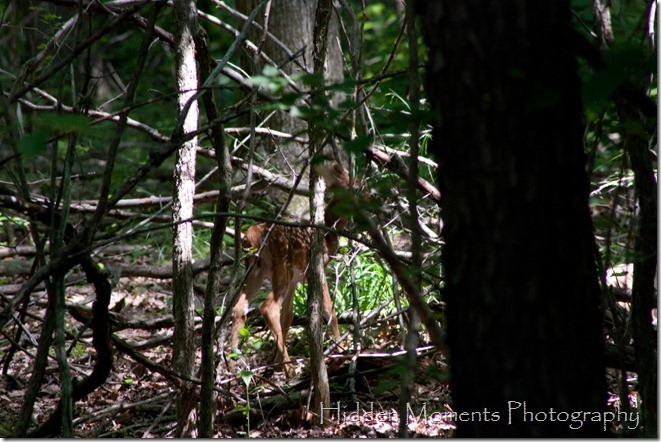 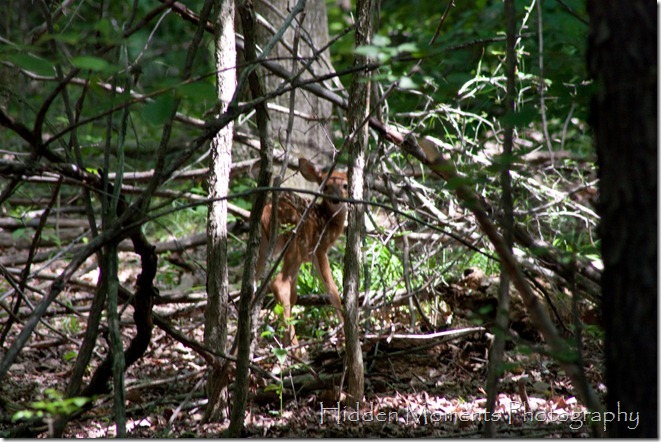 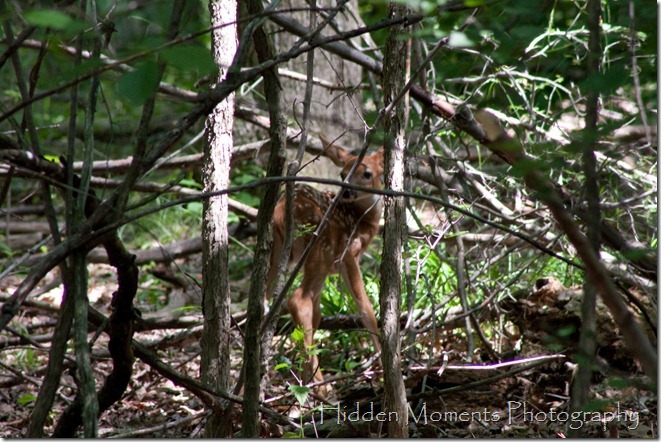 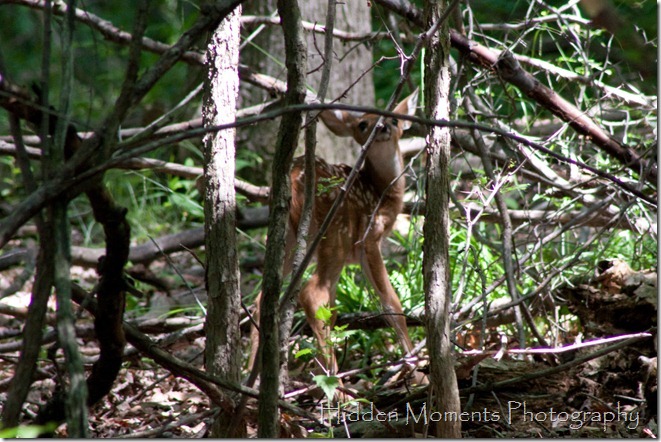 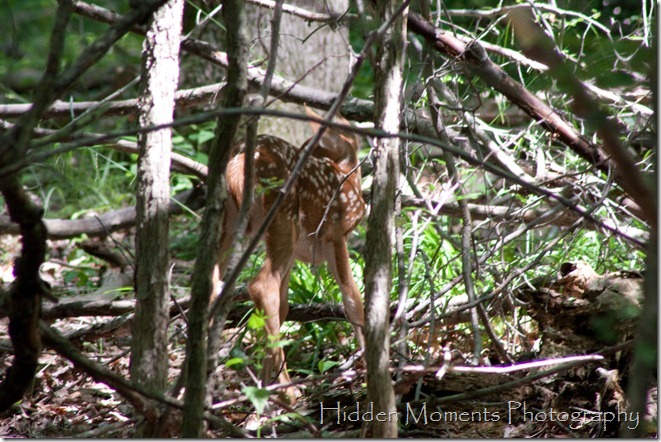 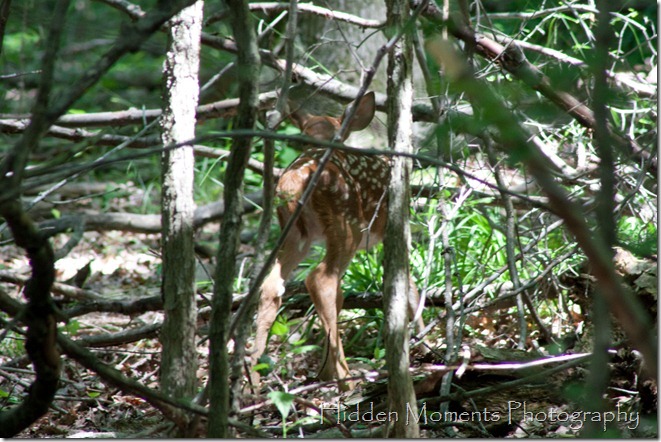 I carefully snuck across the driveway and stepped into the woods in my ballet flats hoping that there wasn’t any poison ivy in my path and stopping every once in a while to take another picture.

Folks we are talking new fawn. New enough that he wasn’t even sure if I was something that he should be afraid of. He was unaware of me for a bit. Then he could smell me. Then he could see me but he didn’t do anything other than watch me as I slowly advanced. Momma was no where in sight which makes me think that he is very new indeed. They tend to leave a fawn in a safe place and go off to feed. 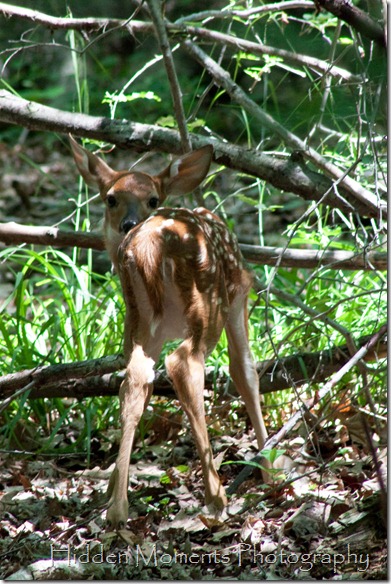 He stayed right where momma told him to until I was about 25 feet from him and then he moved further off into the woods.

My day has seriously been very, very good.

Well other than the whole squirrelicide incident.