Gratuitous Pig Butts Just Because I Can

I have a confession to make…..

We went to the Great Geauga Fair on Saturday, not today. I KNOW! We broke long standing tradition. The weather person was saying that there “might” be rain today, which by the way has not materialized, so we decided to throw caution to the wind and go on Saturday instead. We were actually going to do a complete crazy and go clockwise around the fair grounds instead of our usual counterclockwise….but we just couldn’t mess up the well oiled fair machine. So we just got our onion rings early and called ourselves crazy rule breakers and left the rest alone.

Diggety Dog was it hot! But the sky was blue and the milk shakes were cold so all was good. I know you are DYING to see what we saw so without further ado……… 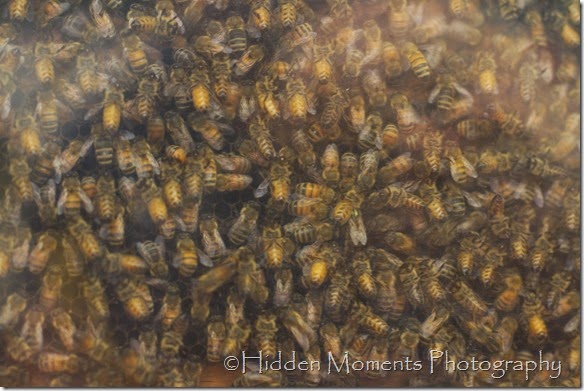 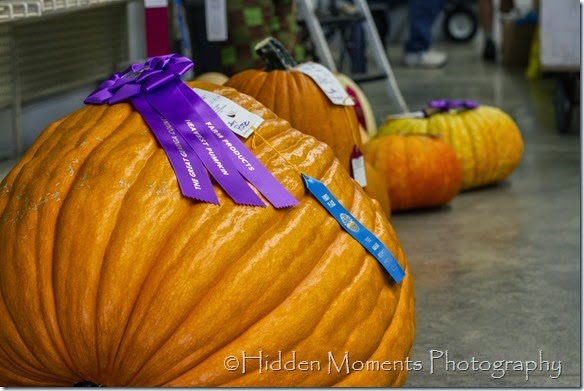 After some talk and internal agitation we started out with the Agricultural barns, where for some reason you will also find the baked goods. I must say that the baked goods looked much better on Saturday than I know they will on Monday. No dry and curling edges. I swear that the prize winning pumpkins get smaller every year. Because it was Saturday rather than Monday the “Bee guy” actually had all of his bees on display. There was a large crowd so I had to muscle my way to the front to get a really boring picture. Sort of like when you see the Mona Lisa at the Louvre…..or not. 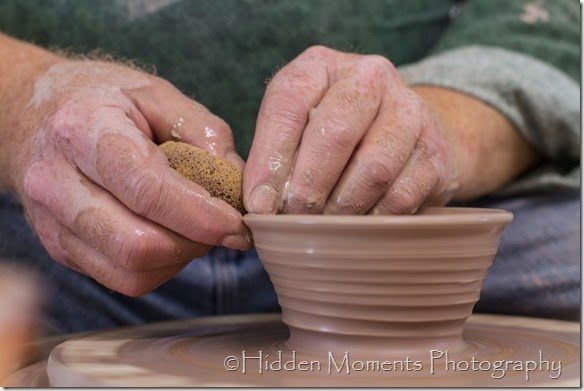 The pottery fellow was actually at work. I think we are going to have to go on Saturday from now on. So much more to see!! 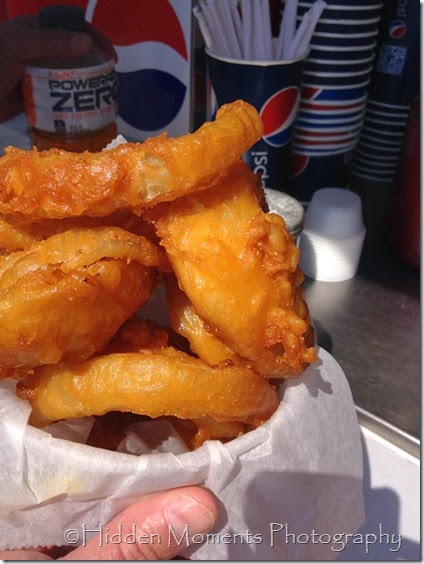 Then we got all wild and crazy and actually bought our onion rings BEFORE we went into any of the animal barns. We were hungry. This is the bucket of onion rings, yes I said BUCKET, when we purchased them at 11:30a. 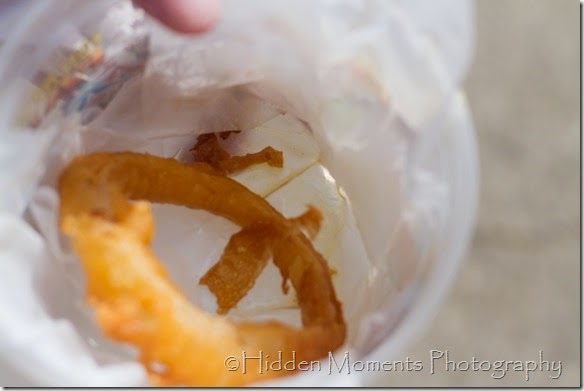 This is the bucket at approximately 11:35a. We are obviously masters of onion ring self discipline. 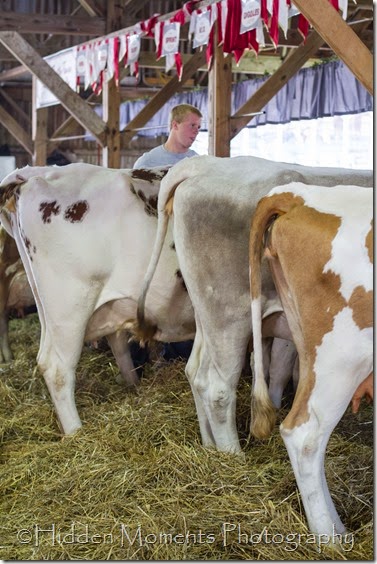 the Dairy barn, where I took gratuitous pictures of cow posteriors. I am getting a reputation for this sort of thing. Starting on FRIDAY morning people were sending me photos of cow butts from the fair. I am so proud. The cows were just hanging around as cows are wont to do. 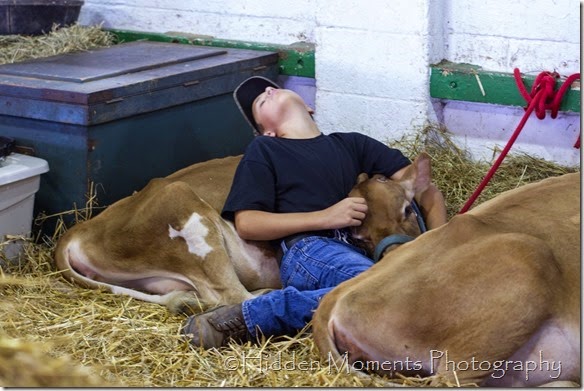 The youngsters, both bovine and human, were napping in various places. 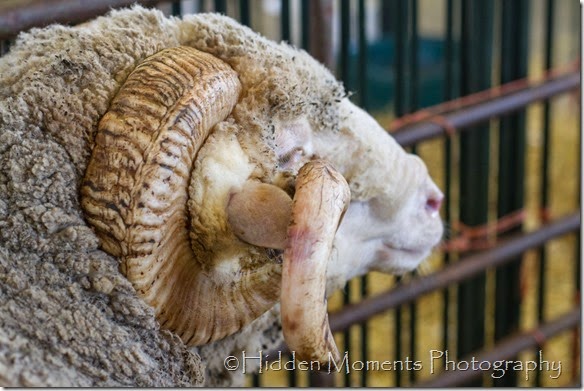 Then I became fascinated with this guy. Look at the horns! He ignored me throughout our entire photo session. RUDE! 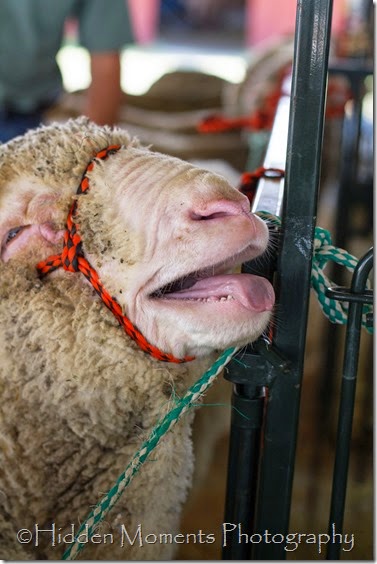 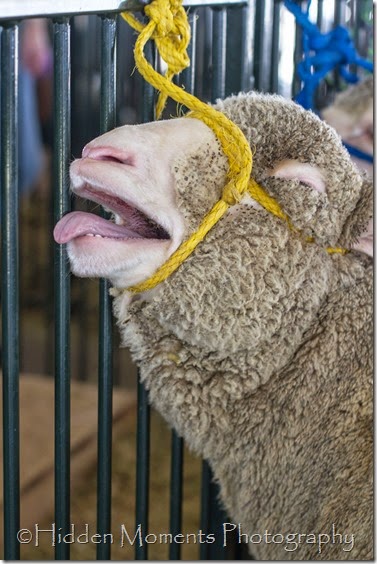 It seemed like every time we turned around the sheep were “baaaaaaaaaaing”. Of course it didn’t help that HHBL takes great pleasure in standing there and egging them on. 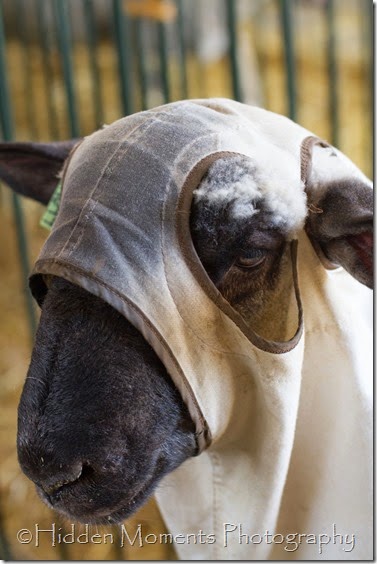 Sir Lambs a Lot (I will just BET he does based upon the size of his nether regions!) says please stop that noise and show a bit of dignity. 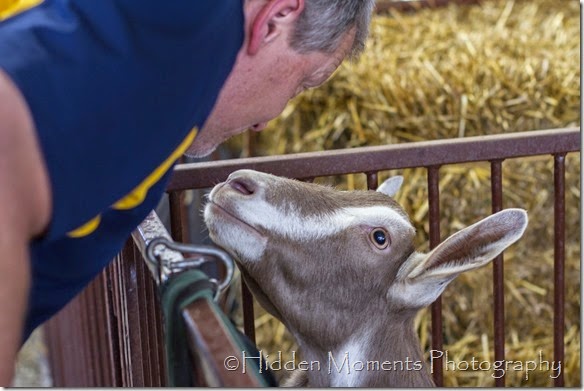 Then it was over to the goat barn where HHBL has to have just this same picture taken, year after year after year…….. One of these days one of those goats is going to take a little nip…..

And I will have my camera all ready! 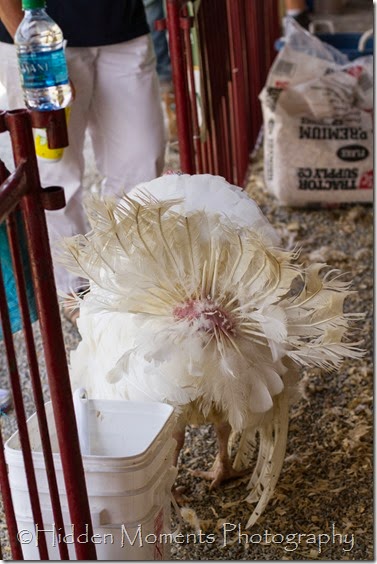 Ugly turkey butt just for your enjoyment. I took this photo and then crouched down to see if I could get a picture of his face if he ever turned around….. 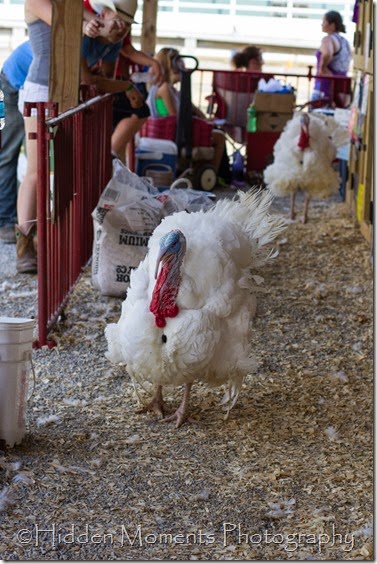 Which he did. And then he started advancing towards me. Jimmeny Crickets! He strolled over, wiggling his tail feather and then turned to the side, right in front of me, and stopped. Holy schlomly! I am snapping away thinking this is so unusual when I hear his “owner” until she sells him at auction for someone else to eat say, “Oh yeah, he LOVES to have his picture taken. He does it all the time.” 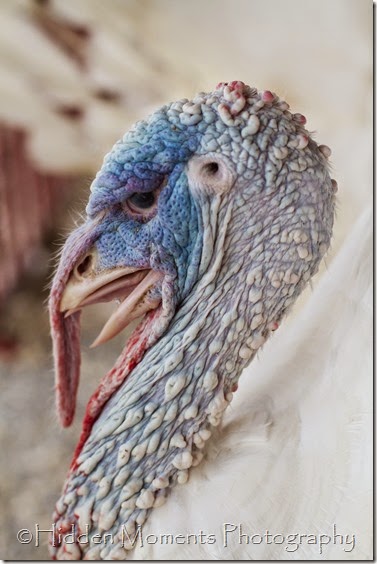 I’m ready for my close up, Mr. DeMille 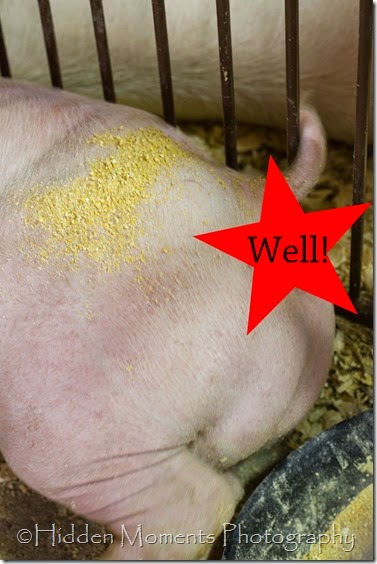 Gratuitous pig butt just because I can. 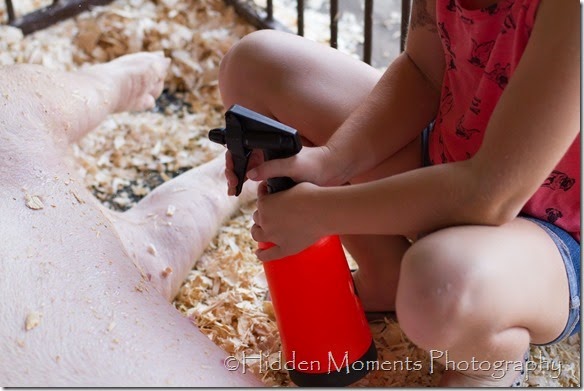 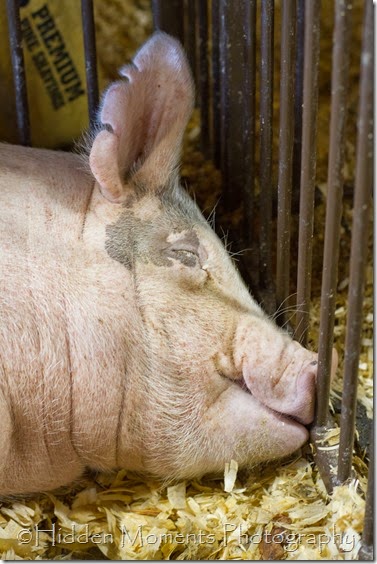 It was a rather warm day so most of the bacon on the hoof were taking a bit of a siesta. If they were REALLY lucky there was some little girl just sitting in their pen and spraying them with water. 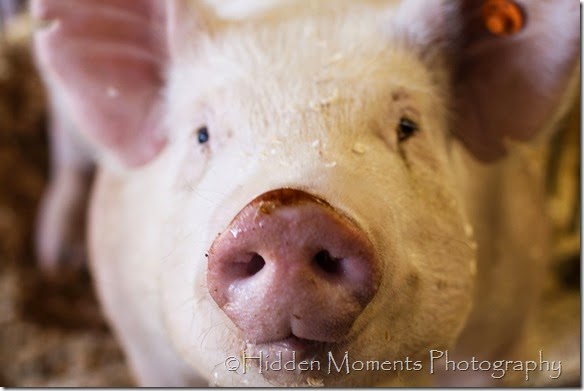 So ugly and yet SO tasty. 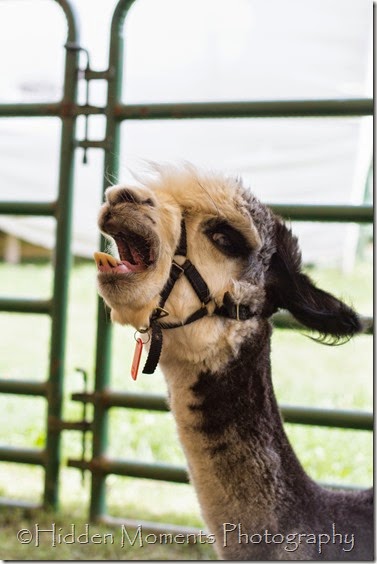 Even the alpacas were making their alpaca noises. They were hot and a bit flustered so there was a bunch of alpaca humming going on. 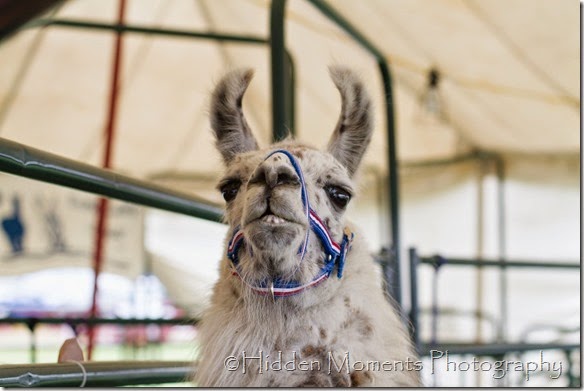 Come closer……closer…..I want to spit at you. 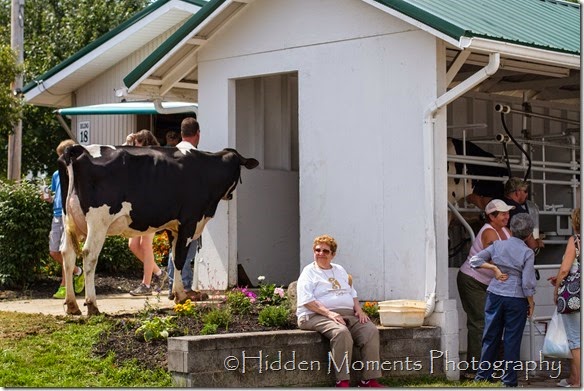 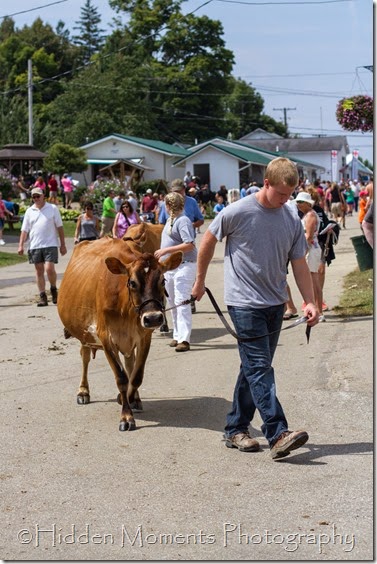 This is also what I love about the fair. Everywhere you turn there is someone leading a cow around. 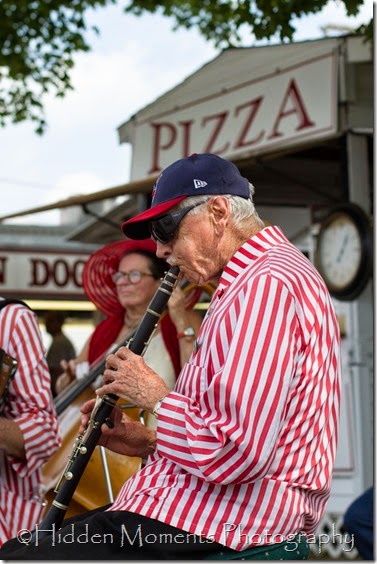 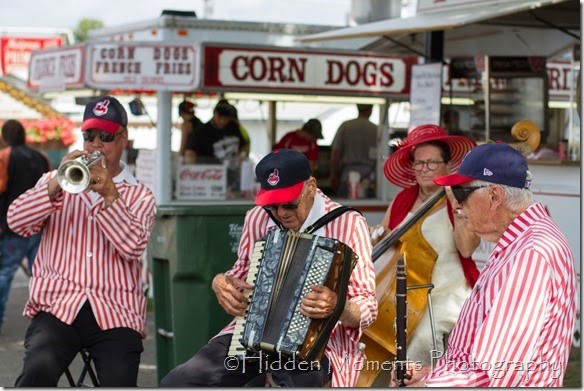 There was a bit of mid way entertainment. 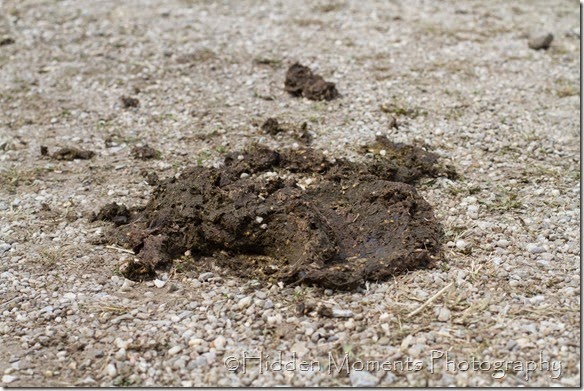 This is your public service announcement. When you are at the fair and you are Instagramming what you are seeing….also be sure to watch where you are stepping. Now back to our regularly scheduled blog post. 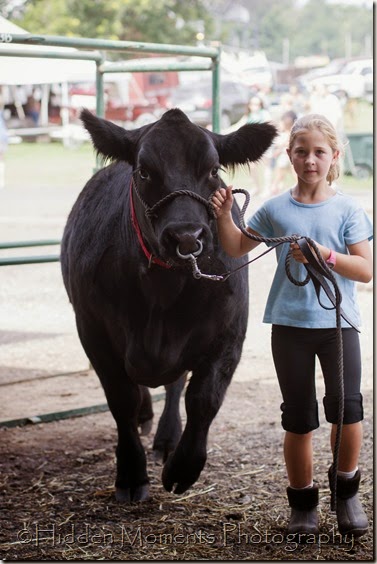 The cow was bigger than the kid! 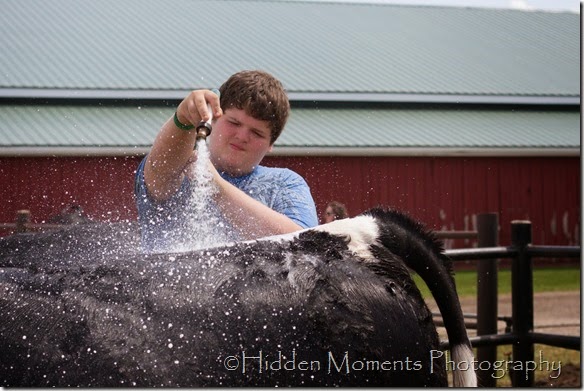 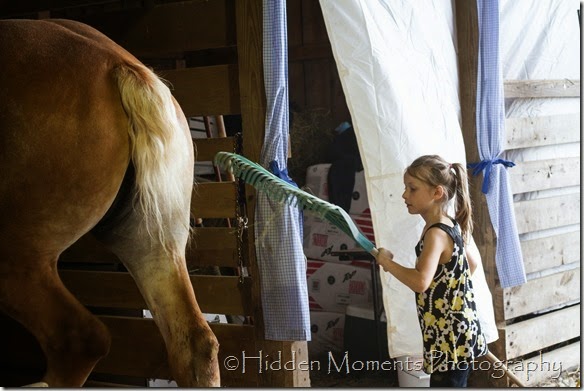 The “Oh PLEASE stop doing that!” moment of the day was in the Draft Horses barn. This little pip squeak was cleaning out the stall of a massive draft horse. He didn’t want to move his foot. She wanted him to. What is she doing to get him to move? She is poking his with the rake and yelling “MOVE! MOVE! MOVE!” Oh please stop that little girl. Where is your mother? Does she know you are a dare devil? She finally gave him one big poke plus a shove where her hands and he moved.

My heart may not be the same. 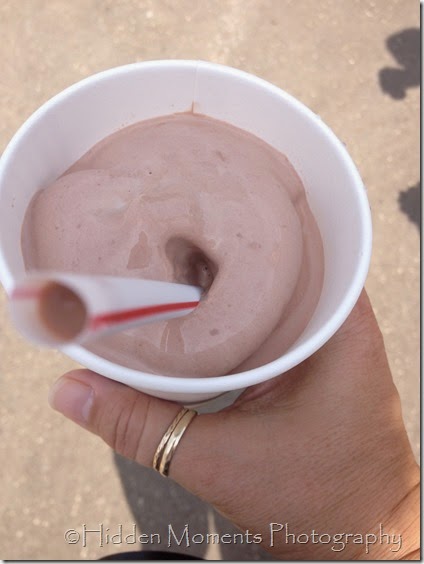 And as usual we ended the day with a 4H milkshake of such deliciousness that all other milkshakes pale in comparison.

Well really, we were just hot and tired and thirsty.

And so ends the yearly sojourn to the Great Geauga County Fair. All the pig butts and cow butts and horse butts that you could ever want.

Hopefully it will last me for a few months.