It Just Doesn’t Want To Be That

If you are a knitter you are going to understand this little bit of whining and general fiber bitching. (sorry, I said a bad word).

If you are not a knitter then you might want to come back tomorrow when I am, hopefully, doing my year end review. That will be sure to set you to napping because it has been SUCH a quiet year around here. Did you catch the sarcasm there?

Now back to the fiber that will not behave.

Yarn/fiber is not an inanimate object of our affection. It doesn’t just sit there and let a knitter do whatever we want with it. Not all yarns are meant for all projects much as we might wish otherwise. Sometimes it is just a matter of the wrong weight or composition of the yarn. Sometimes it is just the “feel” of the yarn. And sometimes the yarn is just a recalcitrant pain in my big fat bahookie and won’t cooperate no matter how much I might wish it to.  I SO wish right at this moment that I could say to that lovely and soft worsted weight yarn,

BE WHAT I TELL YOU TO BE!

But alas, the yarn is not listening to me. Not listening at all. Not paying attention. Not playing nice. In fact, I am sure that if I turn around that yarn will be running with scissors. 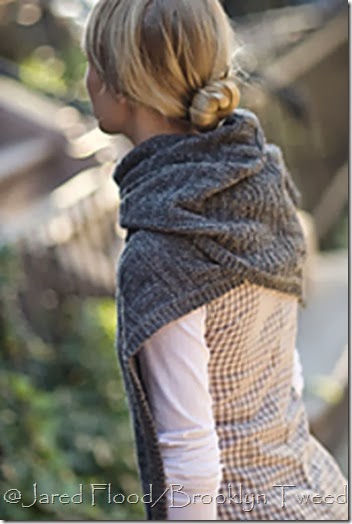 This is Guernsey and we want to be together forever. I have been thinking about this wrap since just about the time Jared Flood put it up on Ravelry. My KnitSib, MamaC, just finished one and it is…oh it is…just fabulous. And when Knit Picks had that latest, evil and enticing sale…..I might have bought some yarn.

Yes, I know I have an entire cupboard full of yarn. But I just didn’t have the right yarn. Nothing in the yarn depository spoke to me and said that it wanted to be Guernsey. But the Swish Worsted Superwash said that it would LOVE to be a Guernsey. And I believed it when it told me that.

The yarn itself is lovely and soft and squishy and once it is washed and blocked will be marvelous. It just won’t be a Guernsey. I have cast on and frogged back THREE FREAKING TIMES on this actually very simple wrap.

Three strikes and you are out.

It isn’t that I made a mistake each time and had to start over. No, each time I was right on with stitch count and all the other things that go into a wrap. It is just that it didn’t look right. Yes, I know that it wasn’t yet blocked and that blocking can and does change things dramatically. I have had some lace projects that looked like a total disaster until I blocked them within an inch of their yarny lives and they then became things of beauty. But not this time.

I took the project to NYC with me, figuring that I would cast on yet again and make some headway since it is a boat load of hours of driving. And I did make head way. Pretty substantial head way. But each time I looked at the work that I had done…..

Folks, I am a third of the way through the entire project and I am not happy. I put it in time out for almost a week, thinking that it was just being naughty and needed some time to get it’s little yarny brain with the program. I hoped. I prayed.

I took it out today and looked at it.

So, I am going to frog the entire thing and make something else. I know what I WANT it to be now. I have the pattern. I have all the yarn.

We will see if the yarn cooperates. Cuz if it doesn’t then it might just be going into the cupboard for a good long time.